2015 was a banner year for both the American Suppressor Association (ASA), and the suppressor community as a whole. In terms of pro-suppressor advocacy, 2015 was anything but quiet. Nine states enacted pro-suppressor laws or regulations, a bill was introduced in the U.S. Congress to remove suppressors from the National Firearms Act, and for the first time in history, pro-suppressor language was passed by the U.S. House of Representatives. As we celebrate our victories, let us also review our setbacks so that we may learn how to overcome them. 2015 was a great year, but we at the American Suppressor Association cannot wait to see what 2016 will bring. Here is our year in review:

At the state level, the American Suppressor Association focuses its legislative efforts on three primary initiatives:  (1) legalizing private suppressor ownership in all 50 states; (2) expanding the ability of hunters to use suppressors while hunting in all 50 states; and (3) enacting “Shall-Sign” or “Shall-Certify” provisions, that ensure all people legally entitled to purchase and own suppressors are able to do so.

Beginning in 2016, we will launch the No State Left Behind campaign. Our goal is simple: legalize suppressor ownership and use in all 50 states. To meet this objective, we are working to introduce and pass pro-suppressor reform in every state where private ownership and suppressor hunting are prohibited, as well as enact Shall-Sign provisions across the country.

Although Illinois, Iowa, and Massachusetts top our priority list for 2016, we will be working to legalize ownership in every state. Yes, that does include California, Delaware, Hawaii, New Jersey, New York, and Rhode Island. We mean it when we say No State Left Behind!

The American Suppressor Association also actively worked on suppressor hunting initiatives in Maine, Michigan, Minnesota, Montana, New Hampshire, and Vermont in 2015. Ultimately, we were successful in three states. 37 states now allow hunters to use suppressors in the field, including Maine, Minnesota, and Montana.

Looking ahead towards 2016, the ASA is already setting the foundation for a successful year. In Michigan, we are currently working with the Michigan Natural Resources Commission (NRC) to legalize suppressor hunting in early 2016. A resolution is set to be presented for first consideration at their next meeting on January 14th. If approved, the measure will then move for a final vote at their February 11th meeting.

In New Hampshire, three years of educational efforts paid off when the House Fish and Game and Marine Resources Committee passed suppressor hunting legislation, for the first time in three sessions.  Now that HB 500, which is sponsored by Rep. John Burt (R-Hillsborough 39), has passed out of committee, it will head to the full legislature when the next legislative session begins in January, 2016.

Although Vermont’s suppressor ownership bill, H. 5, went into effect just this past July, we are already working with bill sponsor Rep. Patrick Brennan (R-Chittenden) to introduce new legislation to remove the sunset provision, as well as legalize the use of suppressors while hunting in the field.

In 2015, seven states enacted Shall-Sign reform, raising the total number of states with a clear path for applicants to obtain a Chief Law Enforcement Officer (CLEO) signoff to 14. Arkansas, Maine, North Carolina, North Dakota, Tennessee, and West Virginia all did so legislatively. Although Tennessee has had a Shall-Sign law on the books since 2003, its text was updated to reflect current model language. In addition, Louisiana became the first state to enact an administrative process through which the Louisiana State Police will provide Form 4 signoffs for suppressor, SBR, and SBS applications for applicants with a valid Concealed Handgun Permit (CHP).

With 36 states that still need Shall-Sign reform, we will work tirelessly to ensure that as many states as possible enact this law in 2016. Despite being out of session until 2017, Texas remains our top priority on this front. We will continue to work alongside groups like the NRA and the Congressional Sportsmen’s Foundation to enact this, and all other state level reform across the country. 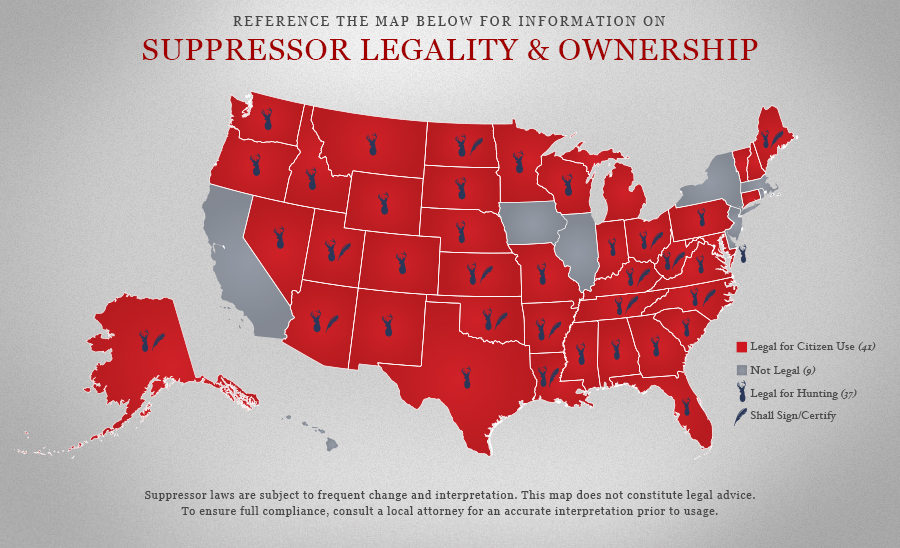 On the Federal level, the American Suppressor Association is focused on four primary issues:

In 2015, the ASA worked with Rep. Matt Salmon (R-AZ) to introduce the Hearing Protection Act (H.R. 3799, S. 2236). This historic piece of legislation will remove suppressors from the purview of the National Firearms Act (NFA), and instead require purchasers to pass an instant NICS check, the same background check that is used during the sale of long guns. The bill also includes a provision to refund the $200 transfer tax to applicants who purchase their suppressor after October 22, 2015.

The HPA currently has 41 bipartisan cosponsors in the House, and has been introduced in the Senate by Sen. Crapo of Idaho. Nearly 40,000 letters have been sent to members of Congress in support of the HPA. Although there is still much work to be done, we are confident that if we all remain focused, suppressors will ultimately be removed from the NFA.

Our second federal focus is on blocking the Obama Administration’s Notice of Proposed Rulemaking, Docket No. ATF 41P. This is the executive action which seeks to extend the CLEO signoff requirement to every member of every NFA trust and legal entity. The ASA worked with Rep. Carter (TX-31) to have a rider blocking the implementation of 41P attached to the Commerce, Justice, Science Appropriations Bill (H.R. 2578), which was one of six appropriations bills to pass the House in 2015. Unfortunately, the language was stripped during negotiations between the House and the Senate for the omnibus appropriations bill. The ASA will continue to work diligently with members of Congress to legislatively block this rule from being implemented.

Our third federal focus is the removal of the CLEO Certification requirement for NFA transfers. We are currently working with members of Congress to draft legislation to eliminate the de facto veto power that CLEOs hold over NFA applicants. While blocking the implementation of 41P is a top priority, this legislation will permanently fix the modern day problems associated with the antiquated inclusion of CLEOs in the NFA transfer process.

Finally, the ASA is also working to fix the misinformed State Department ban on the export of suppressors to allied nations overseas. This ban is based on nothing more than an internal State Department memo, written over a decade ago, that was never published in the Federal Register. The ASA has been working with both the State Department, as well as members of Congress, to fix this problem.  There is simply no reason to prevent American manufacturers from competing in global markets, like those found in the United Kingdom and New Zealand.

The successes of 2015 would not have been possible without the widespread support of our members, our sponsors, and the partner organizations with whom we have the privilege to work alongside. Without our members and our sponsors, the ASA would not exist. We would especially like to thank AcuSport, SilencerCo, Silencer Shop, Daniel Defense, Gemtech, Yankee Hill Machine, Thunder Beast Arms Corp., Advanced Armament Corp., Dakota Silencer, Federal Premium Ammunition, Freedom Munitions, Liberty Suppressors, and Vortex Optics, as well as all 91 ASA Dealers for contributing to the ASA, and allowing us to advocate on their behalf.

The American Suppressor Association is one part of a larger team that is working hard to pass pro-suppressor reform across the country. We are proud to work alongside partner organizations like the Congressional Sportsmen’s Foundation (CSF) and the National Rifle Association (NRA) to advance our cause nationwide. In October, we were honored to receive the “2015 Friends of NASC Award”, for our support of the National Assembly of Sportsmen’s Caucuses and the CSF. Without the support of NASC, the CSF, and the NRA, many pro-suppressor laws would not have passed in 2015.

The path to victory will not be easy, but if we work together and make our voices heard, we will ultimately prevail. We look forward to the day when we are no longer taxed to protect our hearing while exercising our Second Amendment rights at the range, and in the field. Together, we can ensure that future generations of sportsmen and women will no longer have to sacrifice their hearing.