HPA is the #1 most viewed bill at Congress.gov

WASHINGTON, D.C. – The Hearing Protection Act (HPA) was the #1 most viewed bill at Congress.gov last week. Last week we asked, and you delivered, to make the HPA the most viewed bill. These grassroots efforts will help keep the HPA at the forefront of pro-gun legislation under the new Administration. It is only through concerted effort and continued pressure that we will be able to gain back the rights that we were stripped of over 82 years ago when suppressors were incorrectly added to the National Firearms Act. 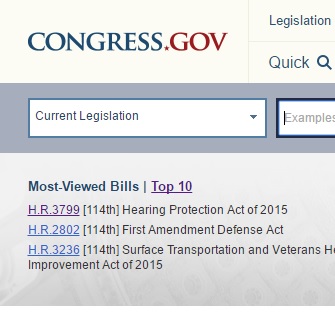 Yet another pro-suppressor article was published this week in the Free Beacon quoting ASA Executive Director Knox Williams, and ASA Board Member and SilencerCo CEO Joshua Waldron on the benefits of suppressor use. While it will be nothing new to suppressor users, each of these articles has the potential to reach and educate thousands of people that only know what they have seen in the movies before.