Noise induced hearing loss and tinnitus are two of the most common afflictions for recreational shooters and hunters. Everyone knows that gunfire is loud, but very few people understand the repercussions that shooting can have on their hearing until it’s too late.

Suppressors reduce the noise of a gunshot by an average of 20 – 35 dB, which is roughly the same as earplugs or earmuffs. By decreasing the overall sound signature, suppressors help to preserve the hearing of recreational shooters, hunters, and hunting dogs around the world. Even the most effective suppressors, on the smallest and quietest calibers (.22 LR) reduce the peak sound level of a gunshot to between 110 – 120 dB. To put that in perspective, according to the National Institute for Occupational Safety and Health (NIOSH), that is as loud as a jackhammer (110 dB) or an ambulance siren (120 dB). For normal caliber handguns and rifles, suppressed sound levels routinely exceed 130 dB, just shy of OSHA’s “hearing safe” threshold of 140 dB.

From a hearing conservation perspective, according to Dr. William W. Clark, the current Director of the Washington University School of Medicine’s Program in Audiology and Communication Sciences, “the most serious threat to hearing comes from recreational hunting or target shooting”.1 This is in large part due to the fact that many people choose not to use traditional hearing protection devices like earplugs and earmuffs because they want to be able to hear their surroundings. Multiple studies have found that between 70 to 80% of hunters never wear earplugs or earmuffs, and nearly half of all target shooters don’t consistently wear traditional hearing protection.2,3 Thus, it should come as no surprise that for every five years of hunting, hunters become seven percent more likely to experience high frequency hearing loss.4

In a 2011 study, the Centers for Disease Control and Prevention (CDC) stated, “the only potentially effective noise control method to reduce students’ or instructors’ noise exposure from gunfire is through the use of noise suppressors that can be attached to the end of the gun barrel. However, some states do not permit civilians to use suppressors on firearms.”5 California, Delaware, Hawaii, Illinois, Massachusetts, New Jersey, New York, and Rhode Island currently do not allow civilians to own suppressors. Even if the Hearing Protection Act or the SHARE Act become law, suppressors will still not be legal in the eight states where they are currently prohibited.

In a similar study from 2014 on noise exposure at shooting ranges, NIOSH recommended, “if feasible and legally permissible, attach noise suppressors to firearms to reduce peak sound pressure levels.”6

In March, 2017, the National Hearing Conservation Association’s Task Force on Prevention of Noise-Induced Hearing Loss from Firearm Noise stated that “using firearms equipped with suppressors” is one of “several strategies [that] can be employed to reduce the risk of acquiring NIHL and associated tinnitus from firearm noise exposure.”7 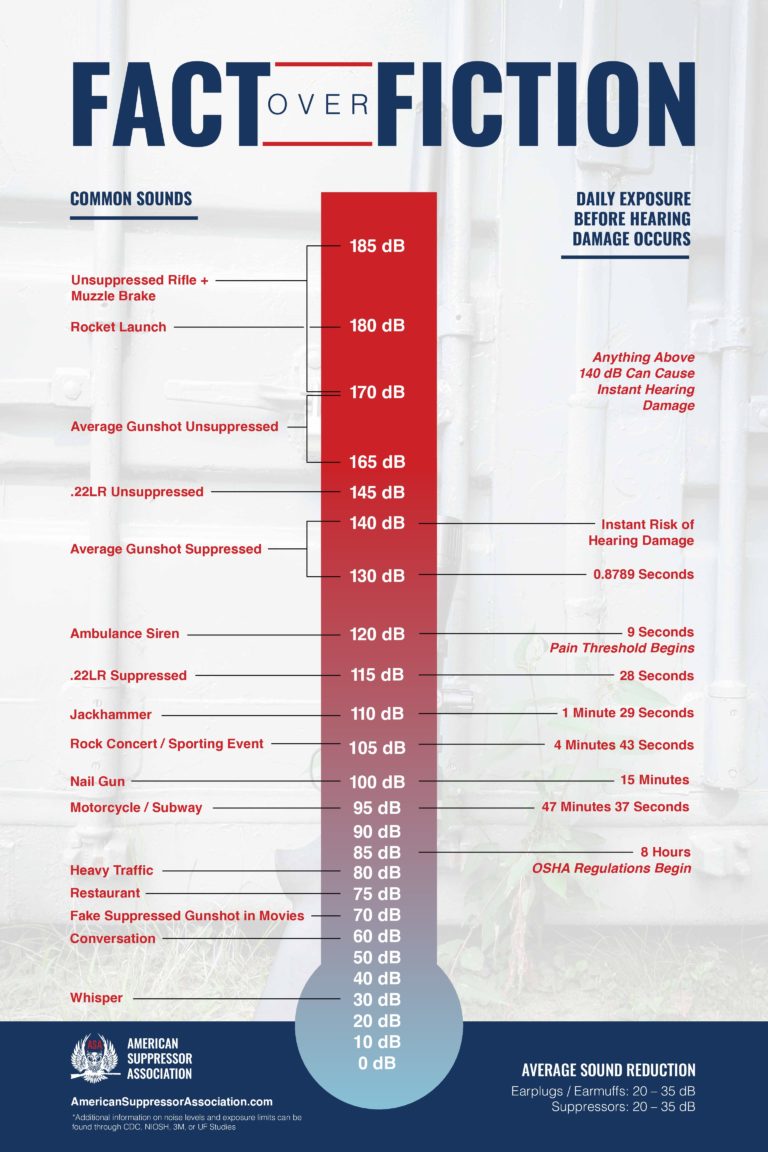